When I arrived at the rented apartment I was staying at in Genoa last year, the landlady showed me around the rooms, including the bathroom. It was curious, as always, seeing the low lying sink-like pot nestling beside the toilet seat. I joked with the landlady about the fact that this is not something we normally find in an average British house. I remember her saying that Italians are indeed, and I quote, “obsessed” about it.

This thing is called a bidet, apparently considered by the majority of Italians to be an essential item in the bathroom, as indispensable as the toilet and sink. You’d be hard pressed to find an Italian house (or even hotel room) without it. I actually had no idea what it was called until I was looking to refurbish my own bathroom in London and tried to look it up. The name, as you can imagine, is French, which betrays its origins. Indeed, in Britain, the bidet is a kind of a joke–another way for us to make fun of the French (or other continentals) and their ways. 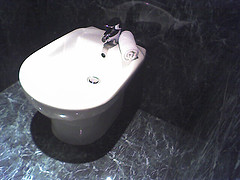 What is it actually for? As a source of water that is closer to the ground, you can use it for washing feet, shaving legs, giving small items a quick wash…OK, I’m skirting around the obvious and most common task that the bidet is used for: washing your bottom. What is wrong with toilet paper, I hear you scream (unless you are Italian, in which case you are considering me with a mixture of pity and amusement)! There is usually a single tap that releases a stream of water upwards so as to make this task easier. You can usually turn a handle to control the pressure and direction of the water to make sure it, erm, covers all the bases.

Supposedly, it is more hygienic than using toilet paper alone, which I suppose makes some sense since you are not using your hands to do the, um, wiping. I do wonder what it is that makes the bidet such an accepted household item in Italy but a joke in Britain–is it just because of the different ways in which the concept of the bathroom was developed over the last century or two or is it fundamentally a difference in attitude over bodily parts. I suspect it’s a bit of both.

In the end, I just couldn’t bring myself to put a bidet in my bathroom. Clearly, some things are hard to shake!