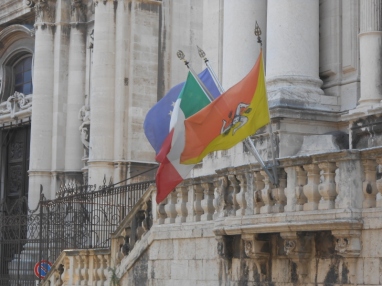 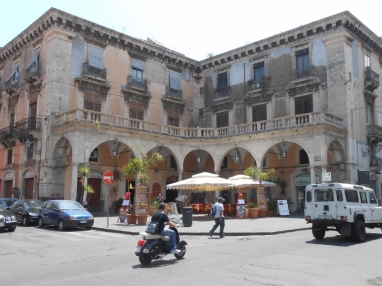 Last night, I arrived at Naples around 11pm and waited for the overnight train to Catania. When I got on, I found that the compartment was designed purely for sleeping in. In other words, you couldn’t possibly sit up straight. It was unbelievably small, with three bunks (I was on the top one), and a small cupboard hiding a sink and mirror for freshening up. I was hoping to have the place to myself, but soon a young Chinese (I assume) traveller also turned up. I thought that was it, when another man, whose Italian smacked of a North African accent, enquired if there was a free bunk available. I said yes there was, or at least seemed to be, but was immediately suspicious, since I assumed that these bunks all had to be reserved. My suspicions were confirmed immediately when the stranger confessed that he didn’t have a ticket and hoped the conductor wouldn’t arrive to check. The Chinese man didn’t speak Italian so didn’t understand what was going on. I felt quite uncomfortable with having to sleep in the same compartment as this person, who was most likely an illegal of one description or another. What if he tried to steal something? Unheard of? Was I applying prejudices? Unlikely, since even if the man had been Italian, the very fact that he said he didn’t have a ticket raised questions.

I did think of going to alert the conductor, but not seriously. I’m not sure why. Perhaps my sense told me that the man really wasn’t a threat, and if he was going to get caught, it was really none of my concern. However, I did move my luggage closer to me on the top bunk, just in case.

The night itself. Oh my. Tossing and turning constantly, I wondered if I would actually get some sleep. It was very hot to begin with, until the air conditioning kicked in (I assume it did, I didn’t actually feel any different). I took off my clothes, but it was still deeply uncomfortable. I really think next time I should get a decent compartment. However, at some point I actually must have fallen asleep, since when I woke up, both of my fellow travellers (including the ticketless stranger) had gone. Light was filtering in through the window and a quick check of the watch told me it was around 7:30am. We were in Sicily! I was a bit miffed to have missed the part where the train goes onto a boat, but hey, at least I got some sleep.

We arrived at Catania Centrale station at around 8:20am. The conductor didn’t actually turn up to tell me it was my stop, so if I’d still been asleep, I’d have missed the stop. Surely they ought to be more helpful for overnight trains? On my last one, from Paris to Milan, I had to hand in my passport to the conductor, who returned it on my stop. Maybe the internal overnight trains work differently.

Anyway, I left the station and walked to the apartment, where I met the owner. Unlike in Lugano, the room I’ve rented is in a flat rather than in someone’s house, so it’s just me here. It’s located on one of those typical shabby, rundown areas that characterise Sicily. The nice thing about renting a place and living by yourself is that you get the feeling that you are actually living in the city, rather than just being a tourist. I’ve done a bit of shopping and washed some clothes today–typical everyday chores you have to do anywhere.

After locking up the flat, I headed out to explore Catania. The city seems to be mainly old buildings, but very charming, with great style. Many of them are rundown though. The centre has some beautiful buildings, including Catania’s cathedral. The area where I’m staying is riddled with narrow streets lined with small apartment blocks, with cars and people wandering through them at leisure. Men and women alike seem to enjoy sitting outside the flats and shops and chatting. There are plenty of little ‘alimentare’ stores, bars, and tabaccherias, just like in many other Italian cities. One thing I have never managed to figure out is how all these little shops actually make money. There are some places that just seem to have the owner and perhaps one or two people (if at all), just sitting around and having due chiacchiere. The other thing that annoys me is when the shop is empty and the owner is standing by the door and looking at people going by. Am I the only one who thinks this puts people off going in?!

Several people, including my host in Lugano, had told me to make sure I go to the fish market near the Piazza del Duomo. I will take pictures of it tomorrow, since today I was just busy wandering through it and checking out all the freshly caught fish and other seafood. The sellers were shouting incomprehensible things (in Sicilian? highly accented Italian?) promoting their wares. Beyond the fish area were several more intersecting streets full of stalls selling fresh meat, cooked meats, fruit, vegetables, and groceries. I didn’t buy anything as I didn’t want to have to head back to the flat straight away!

Walking further north along Via Etnea, I found the Teatro Greco-Romano. You can actually go down into the underground tunnels that were part of the theatre. I wonder what they were used for. It reminded me that Catania was originally a Greek city, just like Syracuse and many other Sicilian cities. After all, Sicily was for many centuries part of the Greek-speaking Eastern Roman, or Byzantine, empire. A post on this in the pipeline.

When I got back to the flat in the late afternoon, I found that the key on the main street-level door didn’t work. Slightly confused, I wondered if I was actually at the right door. The owner had met me on the street and had guided me to the door himself and opened it for me. Could I have not been paying attention? However, I looked up the address he had texted me and it was definitely the right one. I kept trying, and soon got the attention of the group of women sitting outside at the end of the street. The elderly woman asked who I was looking for. Assuming she might know the owner, I gave him his name, and she told me I had to go and ring the bell. I told her I had a key, but she didn’t seem to be paying attention to what I was saying. I left the group and decided to ring the owner. Well, it turned out that the address he’d texted me was just a place to meet, rather than the actual address of the flat. Sigh. The actual flat was in a little side street and wasn’t even numbered. I placed the key in the lock and kept turning it. The door wouldn’t budge. Just as I decided I had no choice but to ring the owner again and look like an idiot, I pulled the handle and it opened. Yes, the door opened outwards, not inwards like in my most British houses.

After a short rest, I headed out again and went back to the centre, where I bought a little souvenir made of lava from Mount Etna. I did some shopping from a small supermarket and headed back, with the dark already falling. I’m thinking of going out again soon and getting a taste of the city at night–always my favourite time.