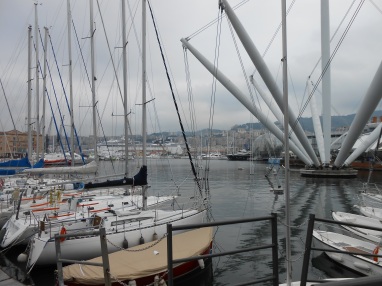 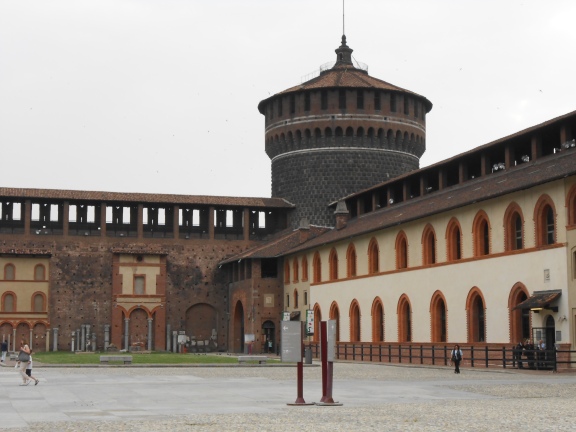 This is a retrospective account in diary form of a trip I took in 2013, based on memory and my notes from the time. Continued from Paris to Rome – Day 1.

I tossed and turned all night. I think I slept a little bit, in snatches, but hardly enough to qualify as a good night’s rest. I couldn’t take all my clothes off either, what with others in the compartment. The train kept trembling and roaring through the night.

I finally got up around an hour before we were due to arrive, put my phone on to charge, and went to refresh myself in the train’s tiny bathroom. Feeling suitably ready, I made sure everything was packed, said goodbye to the girl, who was awake, and headed out of the compartment. The train soon pulled into Milano Centrale station. It was so early–it’s great being up and about at this time of day. Now why is it always so hard to find the left luggage area? I kept following these signs round and round, before eventually finding the place tucked away on the ground floor.

Leaving my bag behind, I headed for a short ride on the subway and finally into the open air. Milano, at last. I actually had been here once when I’d been living in Italy, having travelled here with my mother for a daytrip. I could barely remember anything though.

Arriving at the practically empty Piazza del Duomo, I saw two men flying a drone high above the cathedral. They didn’t look like police or any kind of security, though perhaps they were plain clothes. Was it even legal to do something like that? On one side of the piazza was this large indoor shopping area, dedicated to Vittorio Emmanuelle II. I wandered inside and spent a while looking around the luxury clothing shops and expensive restaurants, many of which weren’t open yet. It’s always nice to be early and see the world before everyone else is up and about their business. I made a note to come back later on in the day to see what it was like when it was all busy. The sun was beginning to turn up the heat as well.

I decided to stop off at a café to get some breakfast. It was still quite early and hardly anyone around. I always find these continental cafes a bit tricky as it’s never quite obvious where you’re supposed to order, where you go to eat, and where you pay. So confusing. Anyway, I went into this café and tried to see if I could play things by ear. Inside, I ordered a brioche and an espresso (what else?!) and ate standing at the bar–now, apparently, this is supposed to be cheaper than seating down. There was only one other guy there, in a business suit, also standing at the bar.

I then went off to find the famous shopping street, the Corso Buenos Aires. Seriously, this road seemed to go on and on. The problem with a lot of the shops was they were almost empty, which meant that if you go in, you become the centre of attention and the assistant will make a beeline towards you and try to make you feel welcome. Which means you feel awkward when you (invariably), leave without buying anything.

My next stop was the Castello Sforzesco, home of the Sforza family who ruled Milan in the 15th century. I also went to see the 4th century Basilica di San Lorenzo.

Back at the Piazza del Duomo, it was noon, and the sun was blazing like never before. I got fed up of buying bottles of water or Coke, and decided to see if I could get a water bottle of some sort. I went to an Autogrill place and bought a very nice looking metal Coca-Cola branded water bottle, which I promptly filled with Cola. Surely there are few better sensations than ice cold Coke on a hot day.

Feeling refreshed, I decided to head off to see the famous La Scala theatre. Obviously, with all these places, I only really had time to find them, have a look around, and take a few pictures. It’s amazing how long the day felt though–after La Scala, I spent a while just ambling through the streets. I didn’t take as many photographs as I had thought I might. Sometimes it really is just better to live in the moment and absorb the sights, sounds and smells that surround you. I can be reasonably confident that the things that make an impression on me will stick in my memory. Besides, it’s good not to have to constantly be taking the camera or smartphone out and looking like a tourist all the time. 🙂

I got back to the Piazza del Duomo and bought a La Scala model souvenir and a few fridge magnets shaped like popular Italian food products (a mini pack of pasta and a carton of panna). Then, I decided, off the cuff, to go and have a late lunch/dinner (no, I’m not going to make up one of those ghastly word combos! Linner?) at one of the expensive-looking places in the Vittorio Emmanuelle galleria. The restaurant was quite empty of tourists by this time, and there were only a few Milanesi there. The inside of this place looked fantastic, and I’m sure it would have been even better to have come here by night–alas, Genoa awaited. In any case, I ended up having a three course meal of a smoked prosciutto selection, velo al milanese, white wine, and a tiramisu and espresso for dessert. Boy that was a good meal! It cost me over 90 euros, but what the heck!? I was truly in the holiday state of mind, with all financial rules duly forgotten about. 🙂

Having paid the bill, I took the subway back to Milano Centrale and collected my luggage. After a dull wait in the lounge surrounded by lots of smelly tourists (yes, they really were smelly), I boarded the two hour train from Milan to Genoa.

I arrived at Genoa Porta Principe at around 6pm, and decided to walk to the apartment, which wasn’t too far from the station. Of course, I was dragging my luggage with me, but fortunately it was the early evening by now and not too hot. My apartment was in the Acquario, or Porto Antico, area of Genoa, near the coast. It is named after the aquarium, which is apparently very well known in Italy. The area was basically a large marina, with boats of all sizes moored all around. Inland, there was a large open space dotted with benches and lamps, with bars, cafes and restaurants on the edges. There were a few temporary structures that seemed to be offering some kind of exhibition.

It was almost impossible to find the apartment’s street on the map. I was using my smartphone, whose battery was rapidly fading and hadn’t been charged since the morning. I daren’t use it too much in case I ended up missing a call from the host. Where was this place? I reached a street, which seemed like the right one, containing two rows of grubby looking houses, even though it wasn’t unpleasant. There was a small children’s play area at the end of the street, which was full of squabbling kids and their (probably equally noisy) parents. I found the number I was looking for. It had a dilapidated door with graffiti outside. Was this really the place? I hoped it looked better on the inside. I’d obviously seen photos of the apartment from the inside and it was nothing like this.

Had I made a mistake? I decided to explore a little more, just in case. Well, what do you know! I found the right piazza, which didn’t really seem like a piazza at all. I wandered up some outdoor stairs and saw two people chatting outside. I asked them about the door number I had and finally got onto the right track. Just as I was heading there, I saw a lady walking towards me. She saw me carrying my luggage and asked if I was Hamish.

Yes! Finally, she took me to the apartment and showed me inside. It was a relief to get to my new room at last and put my bag down. The host gave me a quick tour of the place. It was on one floor, with around five or six rooms of different sizes. There were two shared bathrooms and a kitchen. My room was rectangular, with a large window at the end, a fan, a single bed, fridge, and small writing desk and chair.

While she was showing me around, one of the people who was also staying in the apartment came out to say hello. I introduced myself and he asked if I was, of all things, Moroccan–I guess if you’re not familiar with it, the name Hamish might have a bit of a Middle Eastern ring to it! Anyway, as soon as he found out I was from the UK, he immediately burst into English and practically told me his life story in under a minute. Questi italiani… 🙂 He’d lived in some city in England, got married, got divorced (throws hand in air as he says this), came back to Italy, got a job, lost his job, and ended up living here because it is cheap. At least he could have told me all this in Italian, but no, he’s jumped at the chance of being able to speak some English to someone.

After I had a shower and got changed, I decided to head outdoors again and have a relaxing walk around the marina and do some exploring. The chatty guy saw me leaving and called out to me, offering to accompany me outside. I really ought to have made my excuses and just headed out, but for some reason I was too nice and said, sure. He was still talking in English the whole time. How annoying. He was in the middle of cooking something and he had to wait until it was ready before we could go. So I found myself stuck in the kitchen for nearly half an hour talking (OK, mostly listening) to this guy, when all I wanted to do was get out of the house and explore.

At long last (after what seemed like an age), we headed out. Instead of going off on his own business, my new flatmate (what else shall I call him?) insisted on taking me on a tour of the marina (‘Oh, no trouble…’). There were all kinds of great-looking modern apartments surrounding the area, and the guy talked about how he would love to live in one of these places. It was dark now, and the lights all over the marina added to the charm of the place. One thing that was really interesting was an actual submarine permanently moored in the docks.

After we’d been around the place for a bit, I convinced the guy that I wanted to go back to the apartment. As soon as we got in, I waited for him to disappear into his room, before I slipped back out again. The door was a real pain to work with, and I had to keep fumbling with this ridiculous lock until it finally opened.

Alone at last! I know it sounds so antisocial, but hey, it’s not as if my flatmate was a beautiful woman, now, was it?! 😉 I wandered around the lively area which was now dotted with groups of young people out having a good time. There were lots of bars and cafes, and I had a hard time deciding which one to go into. Eventually, I sat down and ordered a gelato and espresso. Hey, why not? I took out my Kindle and settled down with my Inspector Montalbano novel (La gita a Tindari).

Continued in Paris to Rome – Day 3.