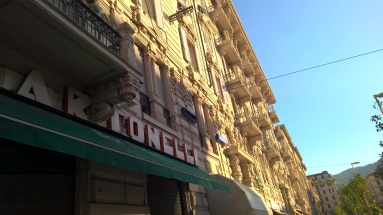 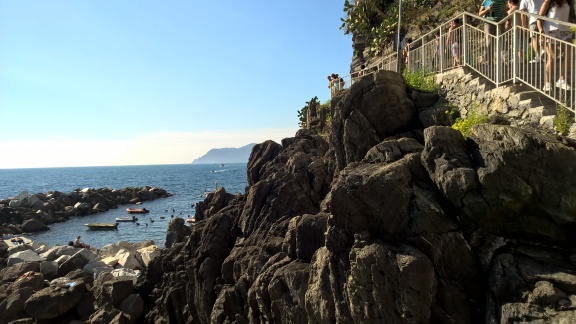 Getting up around 6am, I got ready and headed out towards the station. The next train to La Spezia, luckily a direct one, left at around 8am and arrived around 10am. While waiting for the my train, I went to get a coffee and croissant (cornetto!) at the railways station’s café. This one had a ticketing system, where you pay for what you’ve ordered at the counter, then take the receipt over to another counter and get your food. The funny thing was that the guy at the second counter didn’t even bother to check, but just asked me what I wanted (a coffee, as it happens).

The table where I sat kept being attacked by a group of flies, who seemed to enjoy perching themselves at random points on my body and just being a general nuisance. I think it was because of the light directly above.

The journey to La Spezia was pleasant enough, heading out of Emilia-Romagna and into Liguria, all the way down to the coast. Arriving at the station, I went to look for the toilets. There was a lady sitting outside collecting 70 cents from everyone who wanted to use them. I always find that so irritating, though luckily I had a few coins with me. I wonder what she would’ve said if I’d tried to pay using American Express. 🙂

My friend Sarah’s train from Florence was delayed, so I headed out to take a wander instead of just waiting in the overcrowded station. There was beautiful architecture in La Spezia, many of which have almost a French feel to them. Pretty much every apartment block had its own special design, with ornate balconies and windows. Really beautiful, and with different colours as well.

Back at the station, Sarah arrived and dropped off her suitcase at the left luggage office–she’s on her way to Riomaggiore (one of the Cinque Terre) and we’d decided to spend the day in La Spezia, and maybe take a boat to somewhere else nearby.

We decided to follow the signs for the harbour and check the timetables of the ferries. On the way, we wandered into the large market, which had countless stalls selling a huge range of fresh fruit, vegetables, meat and fish, as well as the usual stalls selling groceries, cleaning products and other bits and pieces. I always find it slightly bizzarre when you get an outdoor market stall that looks like a (slightly untidy) supermarket shelf. The thing with so much choice is that it’s hard to know what to buy, and so you end up getting nothing at all…or far too much! In the end, I bought a pack of apples to have on the way.

After a brief walk out of the market, we reached the harbour. It was great to see the sparkling blue sea of the Ligurian coast again, and we decided to find out if we could head out on the ferry, perhaps after having lunch in La Spezia. According to the timetable, you could buy an afternoon ticket that would stop at a place called Portovenere and then onto each of the Cinque Terre, starting from Riomaggiore. You could then catch a boat to return to La Spezia later in the afternoon. The timetable was very flexible (though also very confusing!) and allowed you the choice of leaving the boat to explore one of the stops and then catching another boat later, or staying on the boat and heading to the destination of your choice. I guess it makes sense thinking about it now–it works like any public transport system, except the trips in the other direction (back to La Spezia) only begin at a certain time.

As it happened, the next boat was leaving in around half an hour and we decided to just buy tickets and go right away. After about half an hour, we disembarked at Portovenere and had two hours to explore the place and have lunch before the boat arrived again. There was a tiny ‘beach’ and lots of large flat boulders on which people lay sunbathing. The harbour was dotted with restaurants mainly serving seafood, with two and three storey buildings in bright colours rising above them. A typical picturesque Ligurian village scene.

Climbing up a hillside, we arrived at a semi-ruined church that had some amazing views of the sea. The sun was burning here and it was getting very hot. There was an arched opening in one of the ruined walls along the cliff, which provided a perfect photo opportunity.

We stopped for lunch at one of the restaurants along the seafront. I had prosciutto with melon–always a refreshing favourite–and scampi. The scampi arrived whole, as did Sarah’s king prawns. It’s funny that as much as I like Italy, I’m not entirely enamoured with much of the food (well, apart from the desserts). Too much cheese and seafood, neither of which I particularly enjoy.

Back on the boat, we stopped off at Riomaggiore, which was actually where Sarah was going to be staying later. She’d have to come back by taxi from La Spezia after picking up her luggage from the station. To reach the actual ‘centre’ of the village, you had to walk up a steep steps, and in fact one ‘street’ was basically an alleyway through a building. It was good to have some momentary shade though! There was a shop there selling (or maybe renting out) diving equipment, and if I’d had more time there, I would definitely have tried this out. So much for day trips!

The whole place was very steep and it felt very good to be able to sit down for a gelato in some shade! I had a lemon and pistachio ice cream, which probably started to melt almost as soon as the assistant had filled the cup!

Sarah had to get back to La Spezia to pick up her luggage, as she had to check in before 8pm. So we returned to the bottom of the cliff to wait for the boat. It was delayed, and as we couldn’t see it anywhere in the distance, I decided to pop back to and try to pick up a small souvenir. Well, popping back meant a hard walk in the sun up the steps to the village. It wasn’t actually that far at all, but when you’re sweating and thirsty, and the sun is overhead, climbing up steps and a steep road has a habit of making time go slower!

I realised I only had a few coins left on me, so I looked for the cheapest item I could find–in the end I bought a nice little fridge magnet for €3. While I was there, I decided to also get a can of Coke to take back for the boat ride. By the by, I like these tall drink cans they have in Europe–the ones we have in the UK are shorter and wider. As I went into the queue to pay for the items, Sarah texted to say that the boat was arriving! Panic! There was a couple in front of me who were haggling about something or other, and I began to think I should just leave the can and run back. As it happened, I managed to pay for the precious drink before tearing downhill as fast as I could, dodging the crowd coming the other way.

The boat had indeed arrived when I got back, though luckily boarding hadn’t started yet.

Sarah said I fell asleep for a bit on the way back, and indeed I really was quite tired, having gotten up so early and generally having had so little sleep over the last few days. Bah, who needs sleep while on holiday? Time enough for that back home! 😉 As we drew near to La Spezia, I went out on deck and felt the spray from the water hit my face. Such a great feeling being out on the water. The sun isn’t so bad when tempered with a splash or two, and a cool sea breeze!

Disembarking, we walked all the way back to the train station by following the Via XX Settembre, a curiously long and winding road. Sarah picked up her luggage and caught a taxi to take her to her hotel, back near Riomaggiore.

My own train for Parma wasn’t due to leave for another hour and a half. With time to spare, I decided to have a wander in La Spezia town centre, and pick up another souvenir and some supplies for the train journey. I tried looking for a cash machine, but not a single one was in sight. I walked and walked down a long shopping street, getting annoyed that such a place shouldn’t have a single cash machine.

Eventually, I reached another piazza and finally spotted a bank. By the way, it’s interesting how in Italy almost every town and city seems to have its own bank. In the UK, there are only a handful of large national banks, and very few local ones have survived the mergers and takeovers of the last few decades.

Why am I thinking about banks…?!

On the way back up the street, I stopped at one of the shops selling La Spezia and Cinque Terre souvenirs. While looking in the window, I noticed someone waiting nearby, and had a pang of recognition. He was looking towards me as well, and I couldn’t help ask him if we knew each other (“Ci conosciamo?”). Sure enough, we’d met briefly a few times at some Italian social events in London. Small world, indeed. He was also waiting for his train, and we spent about half an hour chatting about our trips. He was English, of Italian origin, and had some family nearby that he was visiting. He told me that apparently the Cinque Terre became famous only when the American travel writer Rick Steves popularised them.

Saying goodbye to my unexpected acquaintance, I bought another fridge magnet (I’ve got three now!) and some water. The journey back to Parma seemed longer than the one in the morning, though in all probability it lasted exactly the same.

Arriving at Parma, it was around 10 o’clock, and I was a bit loathe to return to the apartment right away. It was my last night in Parma, after all, and I decided to head to Piazza Garibaldi and have dinner at one of the restaurants there. I went into a place called Duchessa and ordered my favouite pizzza, the Diavola–the one with tomato, mozzarella and salame piccante.

Afterwards, I took a final walk in the Piazza del Duomo before heading back to the apartment. When I got in, I noticed that the landlady had arrived and done all the washing up. I’d messaged her last night to tell her about the water and the Internet problems, and she’d said she would come by today to check it out. It was slightly embarrassing because I’d made the coffee mess all over the stovetop, and would have rather cleaned it up myself. Oh well, who doesn’t want to be saved the need to wash up?!

Tomorrow morning, time to pack up and be off to the city of Romeo and Juliet!