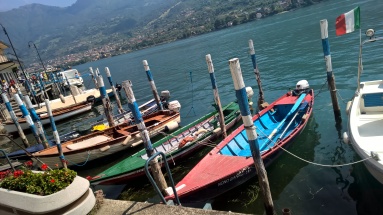 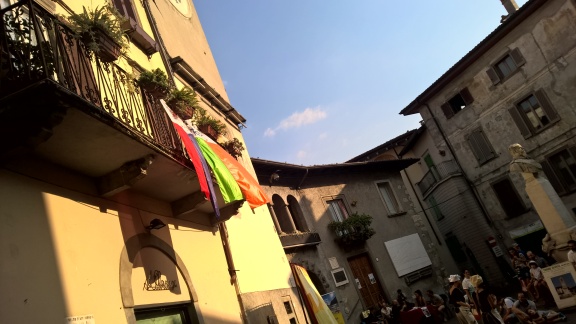 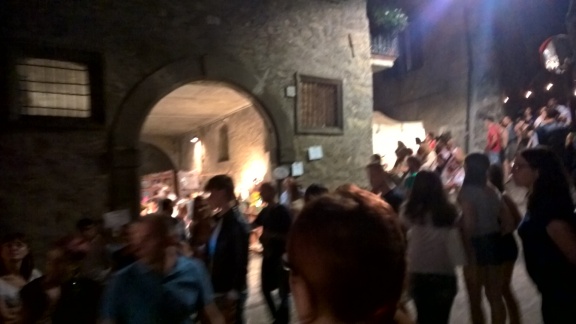 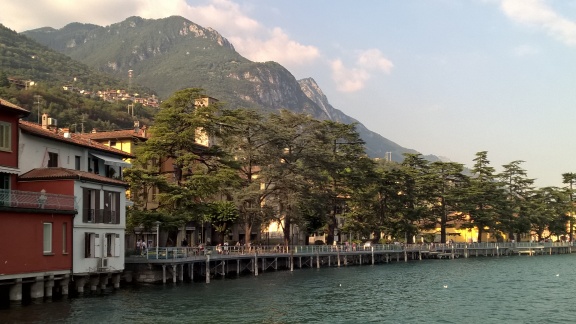 We had breakfast on a table out on the balcony, the warm sun in charge of the day. I think I need to start visiting Italy in the winter, otherwise I’m going to end up thinking there’s nothing but sunshine in this country. Sitting outside, you could see nearby houses as well as the surrounding countryside–the vast cliffs of green marking the valley looming everywhere you looked.

After breakfast, we drove to Solzano, and took a ferry for a short hop–less than 5 mins–to Monteisola, an island at the south end of the Lago d’Iseo. This place is supposedly quite popular with Danish people, though I don’t think I spotted any while I was there! However, there were definitely more than a few foreigners on the island, unlike in Bienno or even Parma, that seem to draw only other Italians.

After a walk along the coastline, and a quick drink, we decided to look for a place to have lunch. We walked up a steep climb to a restaurant on a hill, only to learn from the waiter that the place was full. Great. Back down again it was! We finally settled on a no-frills looking place near the water, and sat down.

The waiter seemed a bit slow, to say the least, and it was ages until he bothered to turn up and ask us for our order. We asked him for a half-bottle of white wine, and arrived with a full bottle. What did he take us for? We had to send him away and ask him to bring us just a glass each. In the end, I don’t think I got a drink at all…

After lunch, we went to the tourist information office to find out the afternoon timetable for the ferry. Alessandra had an errand to run back at Solzano, and recommended that I go on ahead and visit the village of Lovere on the northern shore of the lake.

The ferry wasn’t due for another hour, so we had time for a gelato and some souvenir hunting. I picked up a tea towel with a map of the island, and a tiny ceramic jug shaped in the form of a cockerel.

Back on the water, my friend got off at Solzano whilst I continued on the journey north. It took nearly an hour and a half to get to Lovere, and I took the chance to close my eyes for a bit. I’d also run out of water, and was feeling more than a bit parched by the time I arrived.

Lovere is quite small, with only the one piazza. Just like Bienno, it is recognised as one of the most beautiful villages in Italy, and there was a sign proudly proclaiming this. I actually think Bienno is nicer, though possibly that’s because I’ve only seen it in the evening and while a festival is on. There was a mini children’s performance going on in the piazza when I arrived, and it was fun to watch the kids pretending to be rabbits! I really love the outdoor culture that you have so much in Italy, and the fact that the piazza is a real public space. There was a fountain in the middle where you could get drinking water. One thing I don’t exactly like is that there are never any signs that tell you if the water can be drunk or not. You either have to ask a local or wait and see if someone comes along to drink from it. Better the former than the latter though, as the poor chap who drinks from it might be a tourist themselves…

Getting a bit hungry, I bought a huge sugar covered brioche for €2–yummy! I also picked up a couple of packs of biscuits to take back home for work colleagues. I was running out of euros and couldn’t spot a cash machine anywhere. As Alessandra was going to be coming soon, I decided to hang around near the embankment and wait for her there.

Alessandra arrived at Lovere in her car, and we went back home to get refreshed, before going once again to Bienno. Last night I didn’t really get a chance to have a good look around some of the artisanal displays, so I was looking forward to seeing what was available, and hopefully not spending too much! We’ll see how that turned out…

There were all kinds of shops, including one stall that was selling swords and daggers with elaborate designs! There were sculptors, wine merchants, craftsmen, and indeed all manner of artists displaying amazing creations. There were lamps that looked like giant flowers made of rice paper, grasses planted in mini sections of tree trunks, wood carvings, engravings, and on and on.

We did a bit of wine tasting, and I ended up carrying round a plastic cup around town with my drink. Plastic cup. Wine. No way these things go together! Besides drinks, there were stalls selling beautifully decorated chocolates, sweets, and biscuits, including a colourful display of macarons.

I was pleasantly surprised to hear the sound of Celtic music coming from one of the streets. Arriving into the main piazza, there was another band playing. A lady briefly came out in front of the crowd and performed some Irish dancing. It was so surreal to see and hear an Irish music performance in this out-of-the-way Italian village!

The band then began to play a local tune, and we were treated to the spectacle of a procession of couples dressed in colourful medieval costumes. Afterwards, we once again headed to the outdoor seating area where there was going to be another performance. This time, there were two acrobats on stilts wearing enormous winged costumes, dancing on-stage to colourful lighting effects. Another great show.

We grabbed a panino at the large tent, and I learned a new word–‘salamella’, which sounds like something awful in English (!), but is really just a type of smoked sausage.

It was dark now, though the steep and narrow streets of Bienno were beautifully lit by small lamps fixed to the buildings. We headed out again to look at some of the exhibitors. There was one artist whose work just completely stole my attention–she painted fantasy figures from The Lord of the Rings and of her own invention. They were strikingly beautiful. Alessandra happened to have met the artist before, when her niece did some modelling for one of her pictures. I ended up spending €140 on two of the paintings (acrylic on canvas), which luckily you could roll up! I actually had to go downhill to the bank to get money out to pay for it. Talk about an impulse buy! I still don’t have any regrets though–the paintings are simply beautiful. Now I wonder how much the frames will cost back in London…

Before going off to the car, we milled about in the small food market and I bought some more biscuits to take back home.

Well, I can’t quite believe it’s almost all over! Off to Bergamo airport tomorrow and back to London, which feels like a world away.