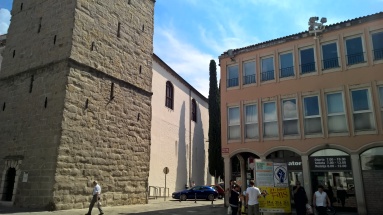 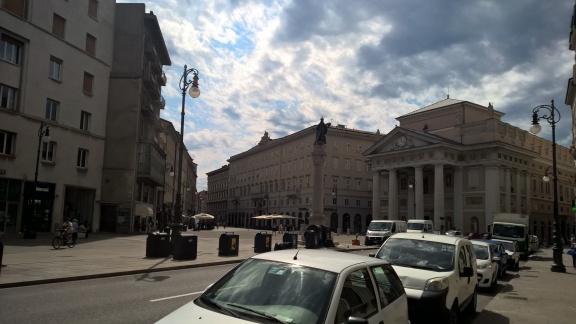 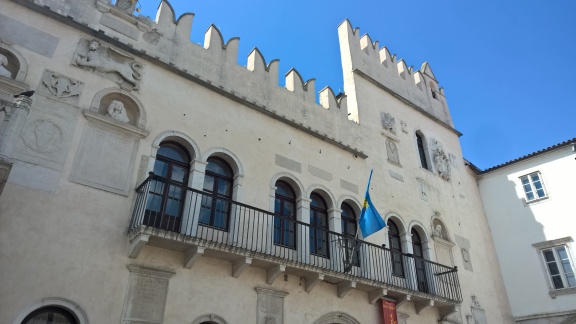 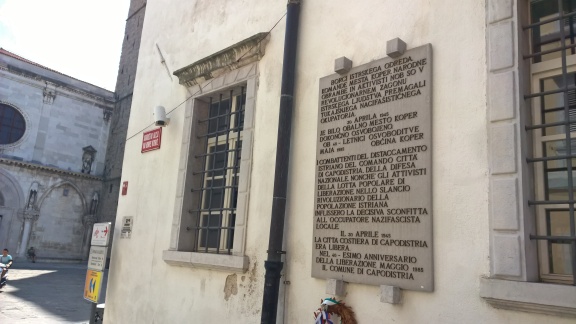 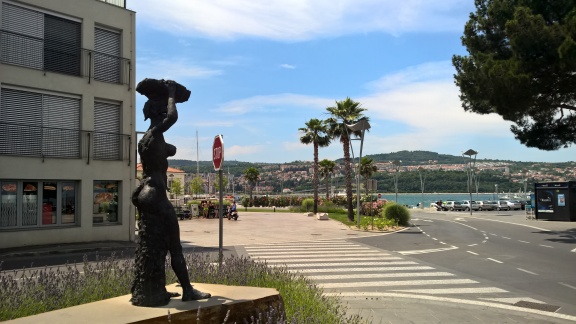 I left the flat around 8pm and walked to the bus station, which is next to the train station in Piazza Liberta, in the north of the city near the coast. It was a bit of a walk up, but only took about 20 minutes or so to get there. This time, I took the paper map with me. No more jumpy GPS location, no more disappearing street names, no more inaccurate directions. I’m probably sounding like a bit of a Luddite, but a good old paper map, combined with a few basic observations, feels a much more reliable way of navigating a new city than relying on your smartphone’s whims. Oh, and did I mention there’s no battery to run out? 🙂

The bus station was a bit confusing, and it wasn’t actually clear where you were supposed to catch the buses. Right in the middle of Piazza Liberta, there were indeed a whole bunch of bus stops, but they were all for destinations inside Trieste. Asking one of the bus drivers for directions, I realised you actually have to go inside the building behind the railway station, which had a set of arched entrances that led to covered bus stops. The thing is, they didn’t look like public entrances at all.

The ticket to Capodistria cost only a few euros, and soon we were on our way. We left Trieste and eventually reached the Slovenian border. It was interesting seeing the sign for Slovenia, without any border post or guards anywhere. It was hard to imagine that only a few decades ago, there would have been heavy security along this frontier. Now, it felt like this border area was a gradual blend from Italy to Slovenia, with a mixture of both in between.

There were signs for Capodistria, which in Slovenian is called Koper. Indeed, the signs for many towns were both in Slovenian and Italian. It seems that Capodistria was once a mainly Italian city, but that the Italian inhabitants left after the Second World War.

The bus and train station was on the outskirts of the town, and I had to walk along a busy road (in the heat) to get to the centre. The latter was surrounded by its original walls, and was much like any small town in Italy. Indeed, if it hadn’t been for the Slovenian street names, it would have been difficult to tell that I was in another country.

There were lots of narrow streets, dotted with both locals and a small number of mainly Italian tourists. I suspect most people were indoors due to the heat, and it was hot! I sat down for an ice cream (can’t call it gelato here!) at a café near the seafront for a while. The waiter spoke both Slovenian and Italian to the customers, though I heard him also using English with some Germans. Clearly, quite a European mix of tourists here.

After exploring the streets a bit more, I decided to head back to Trieste–there wasn’t actually all that much to keep me for longer. I reckoned the best way to get back would be to head in the opposite direction from the sea, which would take me back to the outer wall. Unfortunately, I took a wrong turn somewhere and eventually found myself right back at the seafront where I started! I actually ended up walking past the café again. Typical…

Second time lucky, I reached the entrance through the wall and headed back onto the main roads. On the way, there was a large shopping mall with a ‘hypermarket’. I decided to pop in to get some bottled water for the bus trip back to Trieste, but also to check out what kind of food they generally sold. There was an entire refrigerated section devoted to different types of salami–I really should’ve taken a photo. There was a pasta aisle, but not quite as big as an Italian one.

I had to wait a bit for the bus back to Trieste, during which time I was accosted by a number of people trying to get money off me. Must’ve been my ‘tourist look’…

Back in Trieste, I walked from Piazza Liberta’ to Piazza Unita d’Italia, going down Via Roma, Via Carducci and Corso Italia, all full of shops and cafes. I wandered into a Feltrinelli bookshop and checked out the diaries (diario scholastico). I almost wish I was a kid again so I could get one of these!

It was nearly four o’clock now. I’d hoped to pop in to one or two estate agents but they were all closed for the afternoon. Seriously, do these guys ever work…?

Back home, I had a bite to eat and settled down for a late afternoon nap. I’d wanted to head out to watch the Italy v Spain match in a bar or café, but I felt very lazy and so decided to just watch it at home. Luckily, it was a great (and unexpected) win for Italy (2-0!). I then watched the England v Iceland match, which ended in disaster for England, losing to Iceland 2-1 and crashing out of the competition (as usual).

I might head out again in a while. Unfortunately, as I’ve realised on previous trips, if you stay somewhere far away from the centre (or vibrant parts of town), you end up making it difficult for yourself to just pop out for a bit.